In a near-future U.S. torn by an ethnic civil war, ex-GI Mano Suarez must decide his loyalty to his country—and his wife. 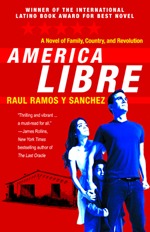 As the immigration crisis reaches the boiling point, once-peaceful Latino protests explode into rioting. Cities across the nation are in flames. Supremacist vigilantes bent on revenge launch drive-by shootings in the barrios, wantonly killing young and old. Exploiting the turmoil, a congressional demagogue succeeds in passing legislation that transforms the nation’s teeming inner-city barrios into walled-off Quarantine Zones. In this chaotic landscape, Manolo Suarez is struggling to provide for his family. Under the spell of a beautiful Latina radical, the former U.S. Army Ranger eventually finds himself questioning his loyalty to his wife — and his country.

The origins of any political revolution parallel the beginnings of life on our planet. The amino acids and proteins lie inert in a volatile primordial brew until a random lightning strike suddenly brings them to life.

The trouble had started two weeks earlier. Enraged at the fatal police shooting of a young Latina bystander during a drug bust, a late-night mob descended on a Texas Department of Public Safety complex and torched the empty buildings. By morning, a local newscast of the barrio’s law-and-order meltdown mushroomed into a major story, drawing the national media to San Antonio. Since then, the presence of network cameras had incited the south side’s bored and jobless teenagers into nightly rioting. Seizing the national spotlight, the governor of Texas vowed looters would be shot on sight. Octavio Perez, a radical community leader, angrily announced that force would be met with force. He called on Mexican-Americans to arm themselves and resist if necessary.

“This won’t be the first time this place has been surrounded by a shitload of angry Mexicans,” Cole told his platoon of weekend warriors outside the shutdown tourist site. A high school gym teacher for most of the year, Lieutenant Cole had been called up to lead a Texas National Guard detachment. Their orders were to keep San Antonio’s south side rioting from spreading downtown.

Now Cole was fielding yet another call over the radio.

“Lieutenant, we got some beaners tearing the hell out of a liquor store two blocks south of my position,” the sentry reported.

“Sit tight, Corporal. The cavalry is coming to the rescue,” Cole said, trying his best to sound cool and confident. From a two-day training session on crowd control, he’d learned that a rapid show of strength was essential in dispersing a mob. But the colonel who had briefed Cole for the mission had been very clear about the governor’s statement.

“Your men are authorized to fire their weapons only in self-defense,” the colonel had ordered. “And even then, it had damn well better be as a last resort, Lieutenant. The governor wants to deter violence, not provoke it.”

Lieutenant Cole had never seen combat. But he was sure he could deal with a small crowd of unruly Mexicans. After all, he had eight men armed with M-16A automatic rifles under his command. Cole put on his helmet, smoothed out his crisply ironed ascot, and ordered his men into the three reconditioned Humvees at his disposal.

“Let’s move out,” he said over the lead Humvee’s radio. With the convoy underway, Cole turned to his driver. “Step on it, Baker. We don’t want to let this thing get out of hand.” As the driver accelerated, the young lieutenant envisioned his dramatic entrance . . .

Bullhorn in hand, he’d emerge from the vehicle surrounded by a squad of armed troopers, the awed crowd quickly scattering as he ordered them to disperse . . .

Drifting back from his daydream, Cole noticed they were closing fast on the crowd outside the liquor store. Too fast.

The startled driver slammed on the brakes, triggering a chain collision with the vehicles trailing close behind. Shaken but unhurt, Cole looked through the window at the laughing faces outside. Instead of arriving like the 7th Cavalry, they’d wound up looking like the Keystone Kops.

Then a liquor bottle struck Cole’s Humvee. Like the opening drop of a summer downpour, it was soon followed by the deafening sound of glass bottles shattering against metal.

“Let’s open up on these bastards, Lieutenant! They’re gonna kill us!” the driver shouted.

Cole shook his head, realizing his plan had been a mistake. “Negative, Baker! We’re pulling out.”

But before the lieutenant could grab the radio transmitter to relay his order, the driver’s window shattered.

“I’m hit! I’m hit! Oh, my God. I’m hit!” the driver shrieked, clutching his head. A cascade of blood flowed down Baker’s nose and cheeks. He’d only suffered a gash on the forehead from the broken glass, but all the same, it was as shocking as a mortal wound. Never one to stomach the sight of blood, Baker passed out, slumping into his seat.

Cole couldn’t allow himself to panic; with no window and no driver he was far too vulnerable. Mind racing, he stared outside and soon noticed a group of shadowy figures crouching along the roof of the liquor store. Were they carrying weapons?

On the verge of panic, the part-time soldiers fumbled nervously with their rifles as the drunken mob closed on the convoy, pounding against the vehicles.

The window on Cole’s side caved in with a terrifying crash. The rattled young lieutenant was certain he now faced a life or death decision—and he was determined to save his men. With the radio still in hand, Lieutenant Edward Cole gave an order he would forever regret.

When it was over, twenty-three people lay dead on the black pavement beneath the neon sign of the Rio Grande Carryout.

Have any comments? Want to know more? Get in touch with author Raul Ramos y Sanchez