The bitter ethnic conflict that divided a nation now threatens to destroy the Suarez family. 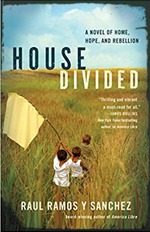 In a Los Angeles barrio torn by years of ethnic war, decorated U.S. Army veteran Manolo Suarez is now a rebel leader struggling to sustain a faltering insurgency—and keep his family together and alive. His deeply-religious wife opposes the fighting. His teenage son has joined an extremist group bent on attacking innocent civilians. Now Mano must battle both a U.S. government dominated by demagogues and the terrorists in his own ranks—without betraying his son or losing his wife.

Some things had not changed. The dawning sun in East Los Angeles was still a feeble glow in the gray haze. But the city’s infamous smog was no longer a residue of its endless traffic. These days, the smoke of cooking fires clouded the sky. The vehicles that had once clogged Los Angeles were now charred shells littering a war-scarred city divided into two walled-in Quarantine Zones.

A rooster crowed outside a white stucco cottage on the north side of Quarantine Zone B. Inside the small house, Manolo Suarez got out of bed and began to dress.

Lying naked on the bed, his wife Rosa yawned, stretching languidly. “What time is it, mi amor?” she murmured.

“Time for me to go, querida,” Mano answered, fastening his weathered jeans, his left forearm bandaged to the elbow.

Rosa sat up suddenly, her eyes flashing. “Where are you going?”

Lacing a scuffed brown boot, Mano looked up. “The less you know, the better it is for all of us, Rosa. I wouldn’t leave you if it wasn’t important.”

“We’ve been apart over a year, Mano,” she said, her long black hair still sleep tangled. “Can’t someone else take your place—at least for today?”

Mano stopped dressing and stared at her somberly. “There’s no one else left.”

“I’m sorry, Mano. I understand,” Rosa said, the edge in her voice gone. Rising from the bed, she slipped on a tattered robe. “Will you have time to eat?”

“No, it’s nearly daylight,” Mano said walking toward the bedroom door. “I should have left an hour ago.”

Rosa stopped him in the doorway, putting her palm on his broad, muscled chest. “When will you be back?”

“When I can,” he said, looking into her dark brown eyes.

“Is this how our life is going to be, Mano?”

“This is a war now, querida. I wish it could be different.”

She sighed and embraced her husband. “At least we’re together again.”

Mano gave her a reassuring squeeze, then stepped away. “I have to go.”

“Wait. Come with me,” she said, taking her husband’s hand. “This won’t take long.”

Mano followed Rosa as she led him through the narrow hallway into the living room. On the couch, covered in a thin patched blanket, slept their son, Pedro. Rosa leaned toward the thirteen-year-old, reaching out to wake him.

Mano gently pulled her back. “Let him sleep,” he whispered.

“Doesn’t a son deserve to see his father?”

“Pedro was asleep when you got in last night,” she said, looking up at Mano, nearly a foot taller. “It’s been over a year since your son has seen you,” she said, her voice rising. “And when you leave, it may be the last time we—”

Rosa stopped as Pedro rolled over and opened his eyes. The boy stared glassy-eyed around the room for a moment before his gaze fixed on Mano. “Papi, is that you?”

Mano knelt by the couch and touched the boy’s cheek. “Yes, m’hijo.”

“Papi, Papi!” he called out, wrapping his arms around Mano’s thick neck. “I saw your name in the newspaper at the camp!” he said, his hoarse-falsetto adolescent’s voice cracking with emotion. “The paper said you were a traitor but everybody in the camp thinks you’re a hero—except for the vendidos. But I told them—”

“Listen, Pedro,” Mano interrupted as he tenderly unwound the boy’s arms clinging to him. “I have to go now. It’s very important. We’ll have to talk later, OK?”

The boy’s smile faded. “It’s just like before,” he said, blinking back tears. “You never want to be with us.”

“No, m’hijo. That’s not it at all,” Mano answered, cupping the boy’s face in his large hands. “There are things I have to do … right away. I’ll be back as soon as I can. I promise.”

Pedro said nothing and turned away from his father.

Rosa wrapped her arms around the boy. “Go, Mano. We’ll be fine,” she said unconvincingly.

Mano rose and peered cautiously through the windows. “Stay inside today—both of you. I think the Baldies will be coming into the zones in strength,” he said opening the front door.

“May God keep you, mi amor,” Rosa whispered, unheard by Mano as he closed the door behind him.

Once outside, Mano moved along the deserted street with a resolve born of necessity. He had nothing left to lose. If captured by the government, he would be sentenced to death under the Terrorist Arraignment Act. Passed five months earlier, the draconian bill most people called the “needle law” charged anyone supporting the insurgency with high treason. The punishment was death by lethal injection. Even Mano’s wife and son faced a similar fate for abetting an insurgent. Although he was happy to have Rosa and Pedro back after a year at the relocation camp, they were now in greater danger than ever. Mano shook his head, trying to clear his mind of the guilt. He had a more immediate crisis.

Yesterday’s nationwide offensive had been a disaster, derailed by a mole who’d alerted the government to the rebel attacks. A terrible question now plagued Mano: How much damage had the informer caused? Since leading a failed assault against an Army outpost yesterday morning, Mano had been cut off from news of the outside world. What little he knew was bad enough.

Guided by the mole, the Army had discovered the rebel command center in Los Angeles directing their widespread offensive. Mano had returned from his raid to find their communications equipment seized or destroyed and his comrades killed.

The sight of spent bullet casings on the street brought him back to the present. Most of the insurgency’s leaders across the continent were now out of touch or dead—and he did not have time for the luxury of grief. He was now the sole survivor of the rebel’s inner command in the area. The next few hours might decide the future of their cause. Turning onto Whittier Avenue, Mano quickened his steps.

A quarter hour later, Mano approached a rundown duplex on Fraser Avenue. The man who lived inside was his last resort for help—Angel Sanchez, the leader of Los Verdugos, a street gang that had become the palace guards of the rebel leadership in Los Angeles.

Want to learn more about HOUSE DIVIDED? Get in touch with author Raul Ramos y Sanchez.