After stumbling onto a multiple murder on a road trip, two aimless hippies become the prime suspects. 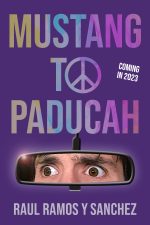 It is ripe for adaptation.”

LOGLINE:  When Peanut and Cruiser are asked to drive a brand new ’69 Mustang from Miami to Kentucky for a thousand bucks, it seems like a great deal for two hippies from Florida. But upon arrival they find a fresh multiple murder scene in the woods, and cocaine hidden in the car. This sparks a desperate flight from the hit-woman and a deranged FBI agent up through Detroit, Canada, down to Cuba, and back to Florida.

MUSTANG TO PADUCAH is a terrific crime/road-trip/buddy/period piece novel. It is ripe for adaptation. Its structure could work either as a feature or a series. It would be easy enough to condense it into an hour and a half to two hours for a standalone film. There’s also plenty of material here for a mini-series. There are plenty of opportunities for expansion along these lines. Peanut & Cruiser seem like a youthful buddy duo who could easily anchor a project that would appeal to audiences.

A road trip turns into an odyssey through the North American counter-culture of 1969 in MUSTANG TO PADUCAH. This freewheeling adventure captures the times perfectly, as the hippie counter-culture is reaching it’s zenith, and will soon start it’s slow fade into the Me Decade of the 70’s while aspects of it are absorbed into the mainstream. This novel has a fresh, gonzo approach that almost feels like a Cheech & Chong story directed by Tarantino. Echoes of Hunter S. Thompson, Shane Black and the New Hollywood movies of the early 70’s like Cisco Pike, Two Lane Blacktop, Easy Rider and Vanishing Point can be found in the novel. Peanut & Cruiser are definitely a buddy duo who initially suggest a more earthbound version of Cheech & Chong. But as the novel progresses, their characters deepen, and we get a feel for what really makes them tick.

Peanut & Cruiser are very much of their time. Their lives revolve around girls, music, smoking dope and the hazy ideals of the hippie generation. But this madcap road trip is also the cultural awakening of two young refugees, one from Cuba, the other from Georgia. Being a hippie is more a fashion statement than a lifestyle for Cruiser and Peanut, the offspring of working-class parents who came to Miami seeking a better life. After venturing outside their inner-city world for the first time, the pair discover a form of hippie heresy: The flower child ethos of dropping out and going back to the land feels less like liberation and more like a step back to the hardships their parents fled in Cuba and Georgia.

The author understands these dynamics intrinsically, and uses them to weave a fascinating travelogue through the less well-traveled roadmap of 1969. The average tale of hippie culture in the 60’s revolves around the hippie centers of San Francisco, London, New York, Los Angeles, and maybe even Woodstock for good measure. The choice of locations for this novel are far more interesting than that. The first two-thirds of the book show how thoroughly the counter-culture had embedded itself under and beside the mainstream in North America. Miami, Detroit and Toronto all have their sections of town where the young outsiders gather, and the hippie underground flourishes. Even the band Cruiser and Peanut find murdered in the woods of Kentucky reference the old hippie band ideal of going out to the country to get it together (poineered by Traffic and The Band). This gives the novel fresh terrain to navigate that hasn’t been explored very much in fiction.

The counterculture was very much a drug culture, and the danger at the heart of that provides the drive and darkness to propel this novel. Drugs and hippies were always an uneasy alliance. The hippie ethos was for peace, love and freedom to live outside “The Man’s” society. This yearning to cast out society in the name of freedom easily crossed over into a wild west outlaw ethos. There was a fine line between the hippie dealing a little dope and serious drug smuggling. As this novel makes clear, there is significant money in drug smuggling, and that brings out the hardcore criminals who have no compunctions about using deadly means to conduct their business. The author explores this dichotomy as Peanut & Cruiser get caught up in a drug turf-war gone bad. They are both streetwise enough to recognize a bad scene when they see one, and go right into survival mode.

The sections in Miami, Kentucky, Detroit and Toronto are strong enough to anchor a compelling novel. But this story really enters some special territory towards the end when Cruiser decides his only course of action for remaining free is to go back to Cuba. There’s some sardonic irony to that decision, seeking freedom in an oppresive dictatorship. Cuba brings him back home, quite literally. It’s the home of his birth and early childhood. But he sees Castro’s Cuba with fresh eyes after coming of age in the United States. Unlike America or Canada, there’s no hippie counterculture in Cuba. The air for one to breathe just isn’t there. The repressive regime of Castro makes any sort of rebellious behavior a one-way ticket to prison, or even worse. The closest thing to any sort of underground youth movement lies in the burgeoning drug smuggling business, which attracts young entreprenuers who don’t mind a little violence when it’s “necessary.” They are outlaws with no regard for laws or rules, and not much more regard for life. Ironically, they also pursue the Capitalist ideal of wealth that is at odds with the Communist political agenda in Cuba. Cruiser is struck with an overwhelming feeling of nostalgia as he reconnects with his Aunt & Uncle, and walks the streets of his youth. He initially seems to adjust his expectations down to the limited opportunites that are available in Cuba. His Aunt & Uncle have gotten used to the prevailing attittude of the citizenry, which is to survive from day-to-day without much thought for the future. It takes the mortal threat from Cruiser’s cousin to shake Cruiser out of this mind-set, as he betrays the cousin for an easy escape back to America. Although it isn’t implicitly spelled out in Cruiser’s narration, the lack of any future in Cuba probably makes the possibility of arrest in America seem worth the risk.

If this novel has one flaw, or opportunity for improvement, it’s in the abrupt death of Erna “Fish” Herring, the femme fatale assassin. As far as hired killers go, she is a true professional who, in the tradition of all contract professionals regardless of vocation, is approaching job burnout. The rewards aren’t what they used to be, but her reputation still rests on completing a job with no loose ends. She’s a compelling antagonist, with a ruthless talent for her job, but some inner insecurities that make her human. She adds a completely different dimension to the story. Although the randomness of her sudden death when run over by a bus has a humorous existential quality to it, it also robs the novel of a fascinating tangent to the narrative. Her trajectory runs parallel to that of Cruiser & Peanut and their other antagonist, and seeing them intersect towards the end could have reaped dividends. It’s quite possible that she’d sort of outlived her usefullness in the author’s eyes, and perhaps she just wouldn’t have had a place when the story switched to Cuba. Since the novel’s set for publication, it’s too late to do anything about it anyway. But if a film or TV adaptation ever materializes, it’s worth reevaluating Erna “Fish” Herring’s place in the story, and maybe expanding it.

The other chief antagonist on our heroes’ trail is FBI agent Jack Brill. He represents the madness at the heart of mainstream society at the time. His irrational hatred of anything that goes against the status quo has found it’s symbol in the counterculture, and has irrevocably warped his sense of reality. There is also a suggestion of impotence with him, possibly to hint at the decay and corruption at the heart of the establishment at the time. Brill’s insanity seems to exist within the button-down confines of the FBI a little too easily, until his mania gets the better of him, and he crosses the literal line between the US and Canada to pursue his quarry out of jurisdiction. Brill doesn’t posses the sheer menace of Erna, but his mania does make him unpredictable enough to keep him interesting.

MUSTANG TO PADUCAH is a terrific crime/road-trip/buddy/period piece novel. It is ripe for adaptation. Its structure could work either as a feature or a series. It would be easy enough to condense it into an hour and a half to two hours for a standalone film. There’s also plenty of material here for a mini-series. There are plenty of opportunities for expansion along these lines. Peanut & Cruiser seem like a youthful buddy duo who could easily anchor a project that would appeal to audiences.